This project was started in 2010 to explore the relationship between Jazz, Music and Art, how they react to and are inspired by one another. Slowly from working on the Jazz circuit and sketching musicians in the heat of their performances I became embroiled in this late night world.
Art of Jazz live sketches

The first stage of the collaboration was to make films together. These films have now been screened on the national and international stages, reaching out to new audiences, being shortlisted for awards and ultimately winning awards. The films range in theme from figurative to conceptual and remains a great platform for experimentation.
Youtube Channel
Our Screenings

The current focus is on films inspired by my time as artist-in-residence on the Simulated mental health ward at Kingston University and two other projects that have collaborations at their heart.

The first is with Bill Mudge and his improvisation trio Toy Rokit. In July 2014 we had a brief artistic residency at the Tane house on the Isle of Wight.

The second is with modern tango composer Juan Maria Solare. We are making a series of 'silent word' films for exhibition and screening. 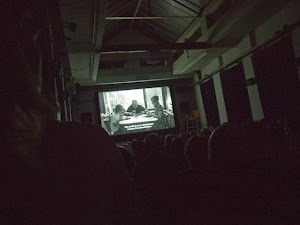